LiDAR on a phone – a new way to capture 3D data

Talk of LiDAR (Light Detection And Ranging) has recently reached the wider media, specifically the mobile tech space. This is due to Apple’s inclusion of a LiDAR scanner in their 2020 flagship mobile – the iPhone 12 Pro. Apple primarily advertise the new sensor to improve depth perception and provide better focusing in low-light environments for the phone’s cameras. But this only scratches the surface of the potential that a compact and mobile LiDAR sensor could have.

This technological progression, while likely to have less impact, is similar to the implementation of GPS (Geographical Positioning System) in mobile devices. Originally used by the military, GPS is now a vital part of our ever-connected world and has revolutionised the way we navigate.

So how is LiDAR currently used – and how will this change in the future?

Current uses of LiDAR in the geospatial industry

LiDAR has been around since the early 1960s and was first used on a large scale to monitor and measure clouds and pollution. It wasn’t until the Apollo 15 mission in 1971, where it was used to map the surface of the moon, that it was widely exposed to the general public. Modern day uses cover a wide array of professions and industries.

Conventional uses of LiDAR in the geospatial industry primarily revolve around surveying areas to produce DTM’s (Digital Terrain Models) and can have an accuracy of below half a centimetre. These accurate DTM models can be used for detailed analysis and play an important role in the UK’s flood models. Due to its use and importance the UK’s governing bodies have made the LiDAR data they collect publicly available for:  England (Environment Agency), Scotland (Scottish Remote Sensing Portal) and Wales (Natural Resources Wales).

Any industry may benefit from extremely accurate measurements and digital models. This means that it is widely used in agriculture, forestry, spaceflight and many more!

More recently LiDAR has also entered the automotive industry and is a fundamental component in developing and producing autonomous cars. By mounting LiDAR sensors on a car, the vehicle is able to detect other nearby vehicles and obstacles as well as the road markings. This data is extremely useful for self-driving cars but is also used in important safety features like Emergency Break Assist and ABS (Anti-lock Braking System).

One benefit for many will be the cost required to access this technology. The new iPhone isn’t exactly cheap but when comparing it to a full LiDAR setup that can cost well over £50,000 you start to see how appealing it will be to many. It’s worth noting that the data the iPhone produces isn’t as accurate as the high-end options and won’t act as a replacement. However, its low entry cost will increase the users of LiDAR and will allow companies with a smaller budget to start collecting 3D data.

The iPhone 12 Pro has a weight of 189 grams and will easily fit in your pocket. Compare this to a LiDAR scanner mounted on an aircraft, drone or tripod and you can start to see the benefits. Collecting data in difficult conditions or hard to access areas is now more possible than ever before.

Another benefit that combines with the mobility the iPhone offers is the speed at which users can collect their data.

Whilst only in the early stages of testing this LiDAR sensor to its full potential, the setup is very easy and only requires the press of a few buttons. By collecting data more quickly, organisations will be able to optimise workflows and collect new 3D datasets.

Putting it to the test

The app collects the data in a similar way to when you record a video and is very simple to use. It creates the data as an object file so we can import them into ArcGIS Pro and use them in our scenes. 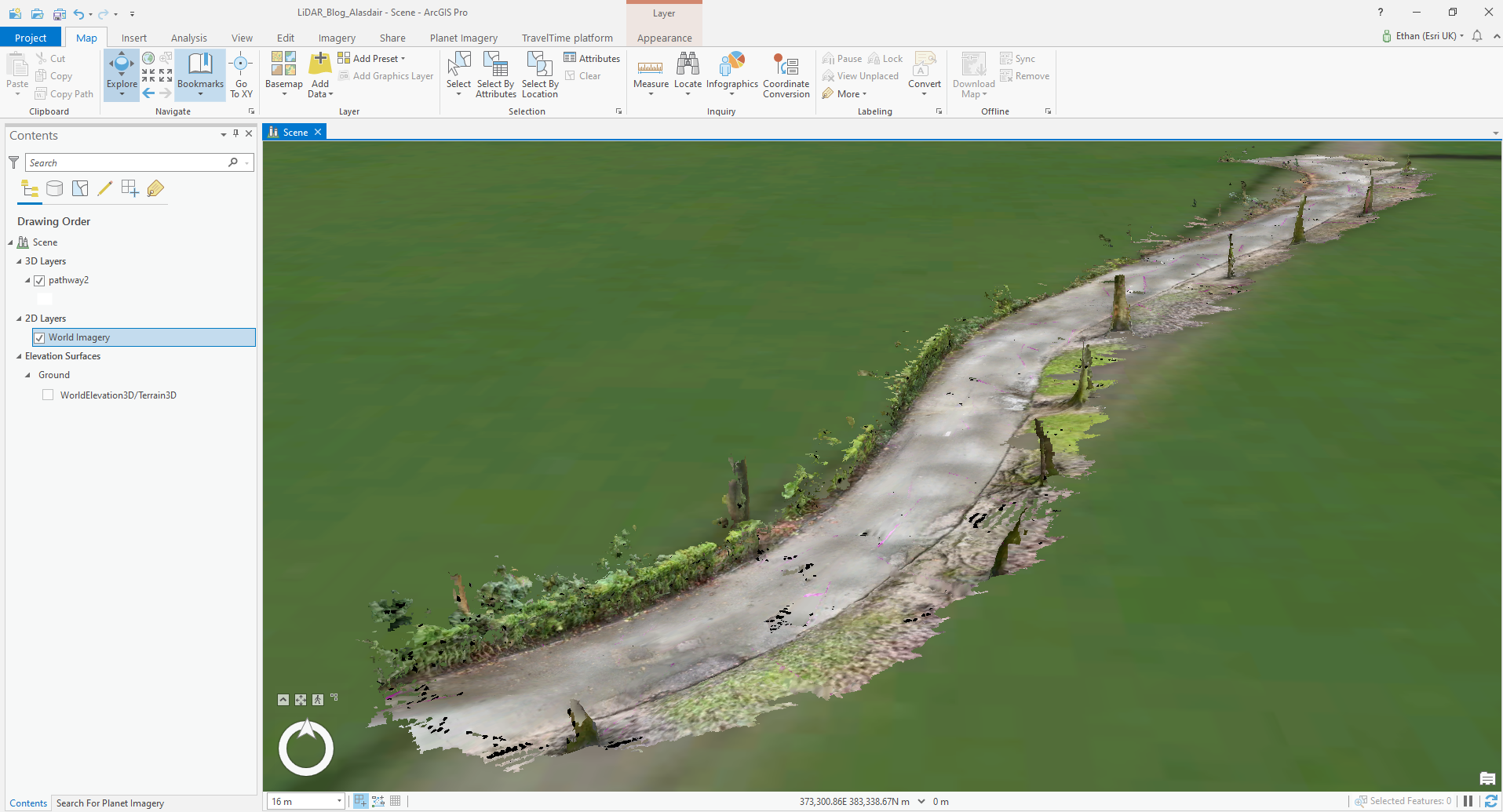 Below is a 3D model of a post box and its surroundings that my colleague collected. The sensor was able to produce a detailed textured 3D model quickly and easily and we can now integrate this in to one of our scenes. It is also worth noting that the data can be recorded at a higher resolution but will in turn be a larger file size. 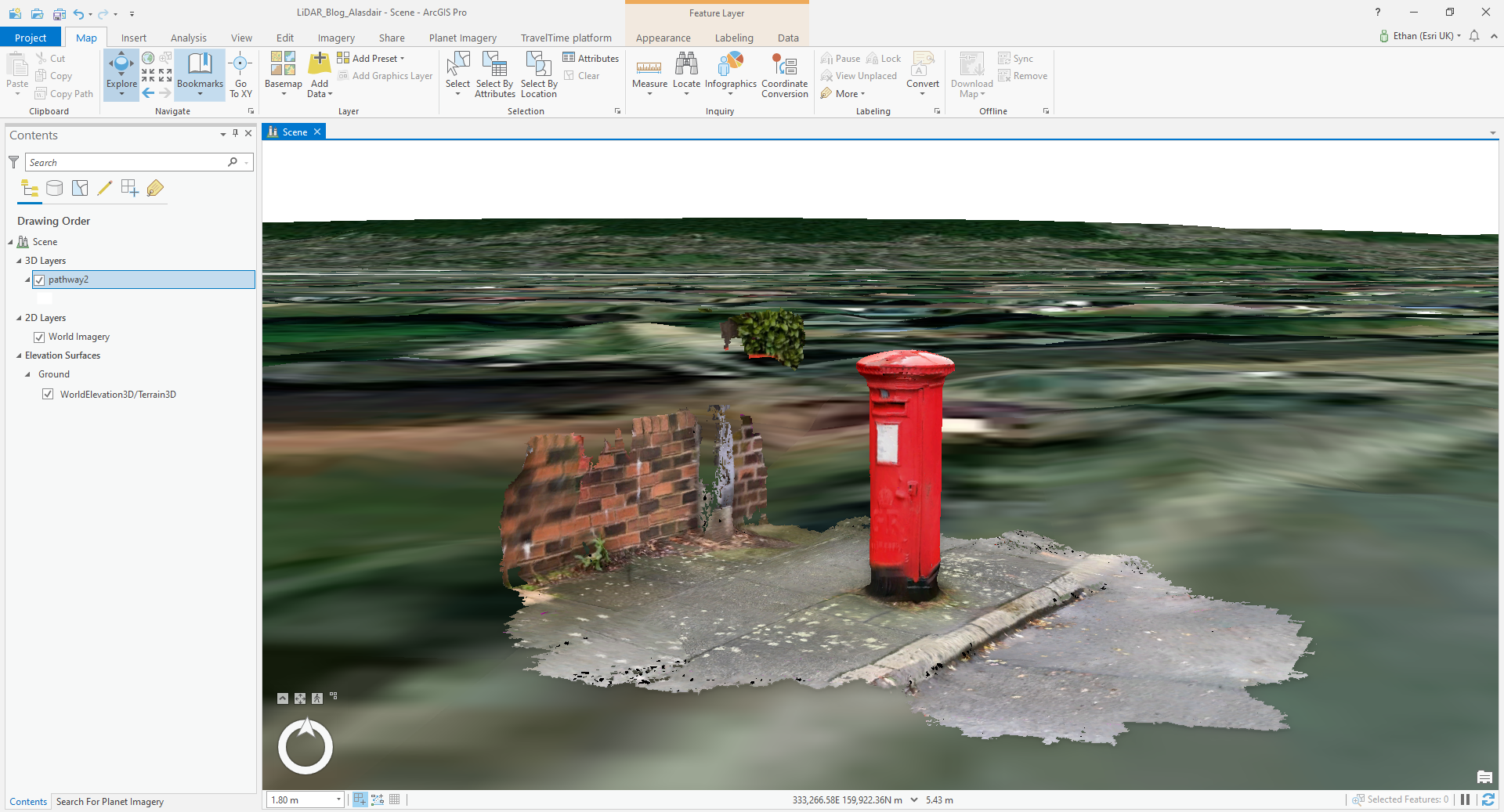 This data was created using the 3D scanner app.

We are currently just at the tip of the iceberg when it comes to exploring the possibilities that mobile LiDAR will bring. We know that some of you have already started exploring this in areas such as planning. As more people get access to the technology and become more accustomed to using the hardware, I believe that we will see new ways to use LiDAR in a multitude of industries as prior technological barriers begin to be broken down.