Taking a spatial-first approach to the location of assets

In this blog post I’ll discuss the relative benefits of linear referencing and spatial referencing. I’ll cover where each can have its place, which should be considered the master, and why.

What is linear referencing?

In many industries such as utilities or transportation where there are long linear networks – such as pipelines, cables and road networks – it is common to record the positions of assets on those networks using a relative positioning system. The traditional way of doing this is known as linear referencing. This technique of identifying the location of assets was created before computers existed, whereby a person would walk along a route and record the distance and offset along that route for an asset.

Linear referencing can be used in utility networks.

What are marker posts?

For very long routes the concept of marker posts is common and they act as a starting point for measuring from, to gain accuracy. For example, 10-mile marker post plus 300 yards. The problem with this is that the 10-mile marker post might not be 10 miles along the route due to historic inaccuracies in how that 10-mile distance was measured. Typically, these marker posts would have been positioned by somebody measuring the distance along the route using a measuring wheel and installing that marker post at what they thought was 10 miles. Similarly, the 11-mile marker post may be less, or more, than 1 mile from the 10-mile marker, so somebody walking back from mile post 11 may not find the asset they are looking for at 1460 yards, which ought to be the same as mile post 10 plus 300 yards (1760 yards in a mile for the younger generation).

Organisations have developed many techniques over the years to better represent linear measures to cater for these differences, even having concepts of long and short miles, and as such can have many ways of referencing their assets, such as marker post plus distance, or marker post minus distance, depending upon how the asset location was surveyed, and hence how it should be subsequently found.

Now, linear referencing is not just used to locate assets, it is a reference, or association, to the linear network itself. So if a section of that linear network needs maintenance, you can also know which assets are related to that part of the network and will be affected. For example, if a road needs to be resurfaced you would know which drain covers might be affected as they would fall into that section of road between the start and end distances of the work along the route.

Another useful case for linear referencing is linear attributes, where the information is a property of the network over a distance. For example, speed limits on roads do not start and end at junctions which would typically define a road segment. The speed limit would likely span road sections and start and end part way along a road section.

Linear referencing is useful for linear attributes, such as speed limits along a road.

The same would apply for platforms at train stations. So rather than chopping up the route into ever smaller pieces to cater for multiple linear attributes spanning different lengths, linear references are really quite useful.

Where linear referencing can cause problems is when the linear network is curved and assets are offset a distance from it. First you have to be sure you are at the right distance along the network, and then walk at exactly the right angle (i.e. perpendicular) from the network to find the asset. Any slight error could leave you at entirely the wrong location. 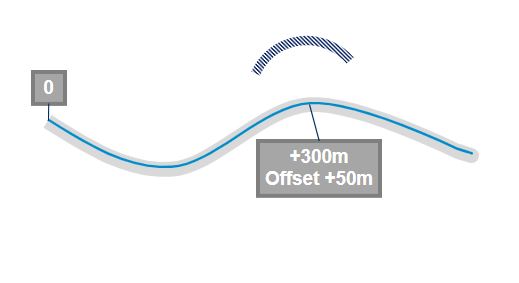 Linear referencing becomes trickier when the network is curved and requires offsets!

With the advent of accurate surveying equipment and more recently global positioning systems, there became the opportunity to reference assets using coordinate reference systems, of which there are many. In Great Britain there are two main ones in use which are Ordnance Survey British National Grid (BNG) and the World Geodetic System (WGS) 1984. These are generally accurate enough for most scenarios. Specialist coordinate systems called Snake Grid exist for route networks where engineering precision is required.

WGS 1984 uses latitude and longitude to locate positions on the surface of the earth. These are what devices like Sat Navs use. BNG uses easting (x) and northing (y) metres on a flat grid, starting from 0,0 in the Isles of Scilly and extending up to around 800000,1350000 off the Shetland islands. 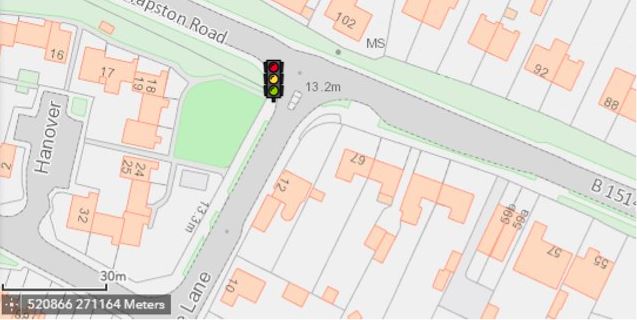 Other ways of locating features on the surface of the earth also exist. For example what3words, which could also be loosely described as a coordinate system, gives each 3m x 3m square on the earth a 3-word identifier. This is now often used by emergency services as it is easier to use than traditional latitude/longitude and easting/northing pairs.

Geographic Information Systems (GIS) can easily display spatial information using coordinate systems on a map. It is much more difficult to visualise spatial information that is described linearly. Conversions from linear references to spatial coordinates can be performed, but this is largely done as a batch process and not on-the-fly.

Linear is often the master

Typically, asset systems now hold both a linear reference and also a set of coordinates to define the location of the assets. The issue then becomes which is the master. Due to the existing ways of working, that have been built up over many decades in some cases, the linear reference is often the king, even if each asset can now be surveyed accurately against a coordinate system. The coordinates are a 2nd class citizen in the data, often being derived automatically from the linear reference.

So, let’s take a look at when taking a spatial-first approach to location is more appropriate.

A spatial-first approach for asset location

Having all your spatial data accurately represented spatially has massive benefits for organisations. GIS systems can overlay all that data as layers, whereby it can be analysed to find patterns, hotspots, and overlaps. External data such as weather and flooding can be overlaid to predict which assets are likely to be affected. Contractors know exactly where every asset is that needs to be maintained. These days they have no need to go out on site with paper maps and descriptions of asset locations based upon linear measures. Modern organisations will be using digital equipment such as tablets, whereby the locations of assets can be seen on a map as well as their own location and so can easily find the assets they are looking for.

This can only be done efficiently and accurately once the spatial location is correct and maintained as the primary location reference. Using locations derived from linear references based upon historic data has the potential to be inaccurate, which then calls into question the decisions that are being made based upon that information.

If any modification to the route occurs, this will have a knock-on effect to all the assets that are referenced linearly along that route. The assets themselves may not actually move, but their linear references will need to be updated. For example, on a 10-km road, if works occur to add a bypass between km 0 and km 1 and the new distance is 1.5km, all the assets from km 0 onwards will need to have their locations re-referenced. No assets have actually moved, but their reference is now different.

Adding a bypass can create confusion with assets and their references.

When capturing the locations of assets spatially, these will be collected using coordinates. If there are requirements to store a linear reference, for example to associate the asset to the network, then that can be calculated and stored but should not be the primary location reference.

Similarly, if the route changes, then the affected asset location references can simply be re-calculated from the coordinates, which haven’t changed. In fact, performing this calculation on the whole dataset will rectify any previous inaccuracies with the linear references held, assuming the assets have all been surveyed and checked for their real-world position.

We’ve largely been talking about point asset locations above. For linear assets this is even more evident. Consider a barrier along a road. A linear reference would state that it starts at 150m, ends at 1000m and is 2m offset from the road. That makes a huge assumption that the barrier follows the geometry of the road, offset by 2m all the way along. The actual geometry might be quite different, and therefore a linear reference does not accurately reflect where the barrier actually is, or its true length.

When linear references and actual geometry do not align.

Checking the real-world position for assets is relatively easy, but can be very time-consuming however. Sending people out on site and potentially putting them in dangerous situations is not something that is undertaken without great consideration of the risks. Alternatives are available though, and with the availability of good quality, high resolution, aerial imagery, many assets can be seen on a digital map in a GIS with the asset positions overlaid. Positions can then be corrected by someone sat at a desk, or even better using automated feature detection through AI. Equally, the route/network can also be updated if that is a visible feature, for example a road, or rail track, and the assets re-referenced to it there and then.

Of course there is a place for linear referencing, particularly when associating assets to networks, but taking a spatial-first approach to location and focusing on location accuracy will give you greater confidence in your location-based decision-making processes and save time, money and reputation trying to rectify any problems caused by those decisions.