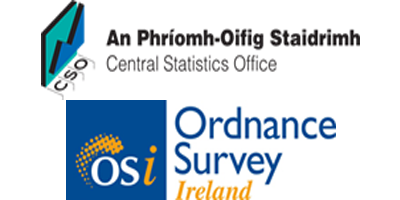 With a shared vision for optimising the use of public sector data, the Central Statistics Office of Ireland and Ordnance Survey Ireland joined forces to maximise value from Ireland’s 2016 census. Their collaboration led to Ireland’s participation in a ground breaking project for the United Nations and the launch of two new data portals that are making information about Ireland’s people, environment and prosperity available in ways that were never possible before.

Every five years, the Central Statistics Office (CSO) of Ireland conducts a census survey of the country’s 4.8 million residents, at 1.5 million households, across an area of 70,000 km2, using the ‘long form’ method to collect data on everything from individuals’ employment status to their means of travel to work. The organisation traditionally presented this census data in statistical tables and published it in reports, illustrated with a few maps and diagrams. It realised, however, that there was an opportunity for it to increase the value of the census by analysing and presenting the information spatially.

Senior executives at CSO engaged in conversations with Ireland’s national mapping agency, the Ordnance Survey Ireland (OSi), and the two organisations discovered that their future visions were very compatible. “It made sense at a number of levels for us to collaborate,” says Lorraine McNerney, General Manager of Geospatial Systems at OSi. “Both organisations were playing active roles in the Government’s public sector reform plan; both organisations worked with data and analytics; and both organisations used Esri’s geographic information system (GIS) platform, ArcGIS. Our discussions culminated in the signing of a formal Memorandum of Understanding (MOU) in September 2016, and the two organisations agreed to work together to create new channels for disseminating geospatially referenced data for Ireland.”

Just a few months after the MOU was signed, CSO and OSi were approached by the United Nations and Esri Inc. and invited to participate in a research project to develop and deploy a new method of monitoring the United Nations’ Sustainable Development Goals (SDGs) using GIS. Ireland was one of only seven countries selected for this ground breaking initiative and the only country from Europe, so as McNerney says, it was something to feel “really proud of.” The opportunity provided a clear focus for the partnership and provided the impetus for CSO and OSi to launch an ambitious, collaborative development project.

What we have done in Ireland really showcases the benefits of having geospatial census information. When you add locations to statistics, they become so much more powerful.

OSi had already developed a data sharing platform called GeoHive, based on Esri’s ArcGIS Online solution, so CSO and OSi decided to use GeoHive as the technical platform for their collaborative projects. GeoHive acts as a “hub of hubs”, allowing the same data to be presented to different audiences, with different views, in a number of sub-portals known as ‘micro-hives’.

While working on the United Nations SDG project, CSO and OSi decided to create a micro-hive to present Ireland’s Census 2016 Small Area Population Statistics (SAPS) as geographical Open Data for the first time. The resulting portal (http://census2016.geohive.ie) allows the census data to be viewed, accessed or downloaded in map form across 31 administrative counties, 95 municipal districts, 3,409 electoral divisions and 18,641 small areas. The data sets include globally unique identifiers (GUIDs) to connect statistics and geography, which is a necessary step for using standard common IDs for spatial data in Ireland.

Using the Census 2016 Portal, anyone can explore Ireland’s latest census data by theme, combine multiple data layers to create their own maps, embed maps in other applications, download data or connect to it via a series of Open Standards application programming interfaces (APIs). “With the launch of the Census 2016 Portal, we showcased what our two organisations could achieve together,” says Kevin McCormack, Head of Division for Sustainable Development Goals Indicators and Reports at the Central Statistics Office. “We also achieved CSO’s goal of making census data available in a more meaningful and accessible geospatial format.”

Four months later, in November 2017, CSO and OSi launched the Ireland SDG Portal (http://irelandsdg.geohive.ie), a separate micro-hive with data aligned specifically to the United Nations’ 17 development goals, 169 targets and 230 indicators. This portal incorporates census 2016 variables from CSO and includes over 100 spatial data sets about Ireland ranging from biodiversity to traffic accidents. The portal provides over 50 indicators relating to Ireland’s progress towards SDGs and Users can click on the map at the top of the screen to see colour-coded visual indicators, such as the proportion of unemployed females in each electoral ward.

CSO and OSi worked in close partnership with Esri Ireland to deliver both the Census 2016 Portal and the Ireland SDG Portal. Indeed, according to McCormack, the success of both projects was due to the collaboration, complementary skills and commitment of the three organisations involved. “As a team, we are very strong,” he says. “CSO, OSi and Esri Ireland have brought together the data, the maps and the GIS platform – and it is the combination of all three that has enabled us to move forwards so successfully.”

As an extension to the two portals, the joint team is producing a series of ArcGIS Online Story Maps to highlight key issues indicated by the CSO census 2016 data and other sources of Open Data. The first of these Story Maps addresses issues including climate change and unemployment and brings together data, interactive maps, images and narratives to tell the story behind the statistics. People don’t need any technical skills or competence with numbers to be able to gain an insight into an issue and zoom into the map to see how the issue impacts the parts of the country where they live or work. “For people who aren’t used to handling data, Story Maps make statistics really easy to understand and are therefore excellent communications tools,” says Esri Ireland’s Katie Goodwin, Team Lead for the development of the national data infrastructure for geography and statistics.

Story Maps provide a new way of communicating that captures hearts and minds. They really help to open up conversations that OSi and CSO wouldn’t have been a part of before and enable us to engage with a wider range of people.

Improved ability to inform Government policy decisions
By making it easier for policy makers, researchers and government officials to visualise statistical information, the Census 2016 Portal and Ireland SDG Portal will play key roles in supporting Government decision making. It is anticipated that Story Maps will be particularly helpful in highlighting critical issues in society. For example, one recently completed Story Map, based on census 2016 data, shows that 40% of children in Ireland live in rented accommodation and are therefore at risk of poverty and homelessness if rental prices increase. “Story Maps open up issues for discussion and help to inform government policy,” McCormack says.

Better information to encourage investment in Ireland’s economy
The Census 2016 Portal is being used by the Industrial Development Authority (IDA), the Irish agency responsible for attracting foreign investment to Ireland, to help it identify the best locations to promote to organisations that are considering opening new businesses in the country. The agency can now easily see the locations of graduates, skilled employees and transportation links and gain the evidence it needs to attract new investment to Ireland. “What we have done in Ireland really showcases the benefits of having geospatial census information,” McCormack says. “When you add locations to statistics, they become so much more powerful.”

Easy access to transparent, meaningful data for all citizens
For the first time, anyone can access Ireland’s census data for 2016 in a geospatial format that is easy to understand and use. This improves public sector transparency, as all citizens can see the data upon which government policies are determined. In addition, not-for-profit organisations can use the Census 2016 Portal to see, for example, where there are high levels of unemployment. They can then direct their voluntary services to the locations where they are most needed and gain the evidence they need to lobby the Irish Government for added support in the areas of greatest need.

A more powerful way of engaging citizens in important issues
Through the development of Story Maps, linked to the United Nations’ SDGs, CSO and OSi can help the Irish Government to raise awareness of important issues impacting the country, such as the need to protect biodiversity and preserve water quality. “Story Maps provide a new way of communicating that captures hearts and minds,” says McNerney. “They really help to open up conversations that OSi and CSO wouldn’t have been a part of before and enable us to engage with a wider range of people.”

A cost-effective mechanism for meeting UN reporting requirements
Significantly, Ireland’s new SDG Portal will support the Irish Government, by making it easier for the Government to meet the United Nations’ SDG reporting obligations. Prior to the launch of the Ireland SDG Portal, there was no single repository for all of the data that the Irish Government would need to find and analyse to produce the reports. Now, government working groups responsible for United Nations reporting can find the pertinent data more easily, without having to duplicate effort or waste time manipulating data. As a result, they will be able to produce reports quickly, potentially reducing costs by saving time.

An example of best practice data sharing
Although still in its infancy, the Ireland SDG Portal has already been highlighted by the Irish Government as a best practice example of how public sector organisations can share and optimise the use of data. This country-owned, country-led project has been featured as a case study in a new strategy for the future development of Ireland’s public service, called ‘Our Public Service 2020’ (www.ops2020.gov.ie), which was launched on December 12th 2017. The policy envisions that “Sharing data across Government will facilitate better service delivery, support better decision making and increase the ease of access to services and drive efficiencies.”

Try out a free trial of the entire ArcGIS platform