A Growing Company Enlists the Four A’s of Location Intelligence

Sometimes it takes an audacious, even intimidating goal to inspire a company to find new levels of innovation.

Article snapshot: Facing an ambitious revenue target, an innovative company employed new digital techniques, including the four A’s of location intelligence, to expand its business and stay ahead of the competition.

That was the thinking behind the ambitious growth strategy launched in 2016 by an insurance firm based in the Midwest. With agile startups beginning to crowd the insurance market, company executives sought to reach more commercial and personal clients who could benefit from the firm’s high-touch, consultative approach. The senior leadership team set a goal big enough to catalyse new approaches to reach that customer base: grow its annual premium by hundreds of millions of dollars—responsibly and effectively for customers.

The growth plan was two-pronged: find new clients in existing markets throughout the company’s multistate territory, while also expanding into new geographies. Since the company sells policies through a network of thousands of independent agencies, executives needed to understand which offices and geographies showed the greatest potential for growth—and they had to do so using data to supplement their instincts. To expand at the scale and pace of the strategic plan, company leaders knew they needed data technology that could pinpoint and predict high-performing opportunities. They didn’t realize that would lead them to the four best practices of location intelligence.

One of the first steps C-suite executives took was to hire a data and analytics officer from a financial institution—an industry where the ability to mine information for competitive advantage was already a main differentiator of success. He then recruited a team of data scientists and analysts with experience in big data applications like machine learning algorithms.

Applying the Four A’s of Planning to Real Time Decisions

The four A’s of location intelligence give business leaders strategic insight to plan long-term investments. It also equips front-line workers with real-time information to make more immediate decisions—for example, relocating workers away from a storm or dispatching a driver to deliver mobile food orders to the most efficient sequence of addresses. For more on these “business decisions at the edge,” read this WhereNext article.

The company’s aggressive growth plans were not without complications. Insurance providers must expand carefully—by appropriately pricing the risk they take on and monitoring the amount of risk undertaken in any one market.

This required a granular understanding of the benefits and hazards of territories where the company planned to expand. By employing a geographic information system (GIS), the data science team could use location intelligence, or location-based business insights, to uncover promising new business avenues while protecting the firm from excessive risk.

“We believe it’s a competitive advantage,” says the company’s chief strategy officer. “The increase in the amount of data available, the variables available, the computing power available, the tools available—it’s going to separate winners and losers over time, and we intend to be a winner.”

The Four A’s of Location Intelligence

Analytics lay at the heart of the work done by the team, as they used GIS technology to segment the entire United States into millions of grid cells complete with over 1,000 variables, including demographic, geographic, and firmographic data. This data-rich grid acted as a basemap for growth, delivering geospatial context on which regions were fertile for business opportunity, while spotlighting risks like coastal flooding or earthquake activity that might weigh against issuing certain policies.

AI, in the form of machine learning, paired with GIS (a combination known as GeoAI) enabled the data science team to create algorithms that predicted the revenue potential of regions and ranked the performance potential of agencies the company might partner with. Automation sped up processes and made analysis more efficient, saving costs and streamlining labour. A cloud-based architecture supported the massive computational effort required to crunch millions of data points and support machine learning engines.

With those four pillars of location intelligence in place, employees from sales managers up to the CFO could make decisions knowing they had access to the best information and location-based data. “We’re getting new insights about what’s working and what isn’t in our business, and then deriving actions as to what we should do about it,” the analytics officer explains. “Then we can predict and scenario test what’s likely to happen. That hedges our investment in a really positive way.”

A few years into the expansion effort, company leaders can already point to success, enabled in part by the data-powered efforts. The firm has grown its commercial lines premium by almost a third since 2016. Over the same period, the average premium per agency has increased by 115 percent. 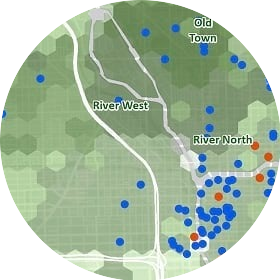 Powered by data savvy, an innovative corporate culture, and location intelligence, the company is on its way to attaining its strategic goals and outperforming the industry on growth and profitability.

By feeding the algorithms huge amounts of company and third-party data, the analytics team could teach models to recognize the variables that signal growth potential. Based on analysis of historical patterns, the algorithms can recognize that an agency located in a town with a certain set of demographic and geographic attributes should generate a certain level of business.

The resultant GeoAI-powered map helped automate processes, saving the sales team hours, if not days, by singling out the best leads for new distribution points in areas where the firm had no presence.

Instead of guesswork, decision-makers draw conclusions based on facts and patterns surfaced by AI.

A Map Key to Communication and Risk Assessment

The segmented smart map made it easier to share information related to the growth plan across departments. Instead of searching through files or charts, colleagues consulted a GIS-powered dashboard showing the location of partner agencies, competitive agencies, and possible areas of expansion.

The analysis was further refined to reflect different lines of business, which depended on different data inputs and were projected to grow at varying rates. Using GeoAI-based analytics, the team segmented those variables and delivered useful smart maps to executives responsible for each line. 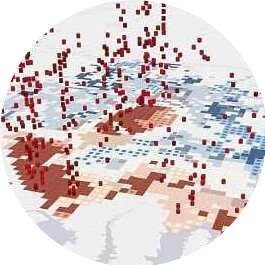 When we talk about GIS . . . it can apply to all aspects of our business, whether that's identifying where customers are and what their needs are, or distribution.

Risk Assessment in the Age of Climate Change

Executives knew that growth at any price wasn’t smart growth, so they focused on sustainable ways to expand. Location intelligence enabled them to move into new territories at a fast clip while sidestepping rising threats from climate-related volatility and natural disasters. Company underwriters could look at current policies and literally see on a map where they stood in relation to existing or potential hazards.

For example, the data analytics team helped build a tool that allowed underwriters to plug any address into a search bar. An automated geocoding service calculates how far that point is from the closest shoreline. This capability gives underwriters a better sense of threats to a property or business from events like hurricanes or other severe weather, resulting in an analytics-backed assessment of whether to assume the risk in the first place.

A Faster Route to Processing Claims

In addition to boosting the company-wide growth plan, the data science team helped streamline daily operations at the insurance firm. Smart maps allowed claims managers to speed up what was once a multistep process of organizing claims and manually plotting them with pen and paper. With the help of GIS, managers can now document all the day’s claims on a dashboard, and dispatch adjusters based on their suitability to handle the claim as well as their geographic proximity. The technology also helped adjusters optimize routes so they weren’t doubling back or wasting miles on the road—saving time for themselves and their clients.

Underwriters used the same tool to analyse existing policies and identify misclassified risks. Some policies were actually closer to the coastline than had initially been recorded, while others were farther away. In both cases, accurate geospatial insights helped the company fulfill the core business function of appropriately taking risk.

Automation aided the process by adding new or updated data to the national grid. “That’s a big time savings just from a model maintenance standpoint,” the analytics director says. “It frees up our data scientists to do more value-add work rather than updating and changing data.”

The four A’s of location intelligence also make it possible to contextualize information that might otherwise be treated as disconnected data points, discarded, or shrugged at in other firms. Instead, analysts were able to discover patterns that make the company more competitive.

For instance, a hot spot analysis of claims around one Ohio city revealed areas where customers were reporting damages at higher levels than seen in the past. By overlaying data like population growth over the geographic clusters where claim activity increased, managers could determine whether the uptick was simply due to a larger volume of residents. That insight could trigger the company to allocate more claims adjusters to the area.

Alternately, if those claims happened to coincide with clusters of hail storms or other climate-related trends, the information might lead executives to slow the pace of policy writing there, or change the kind of products available.

The future is: how do we leverage . . . additional data variables, how do we become more predictive, and how do we manage the risk more effectively?

A Suite of Data Technologies

Company leaders began with an ambitious goal, then put the right talent in place. The data science team translated the strategic ambition into algorithms and smart maps that could point the company toward growth, agency by agency, juxtaposed against potential risk. That GIS-powered location intelligence was made possible by a suite of technologies working in tandem: the insights of analytics, the predictive modelling of artificial intelligence, the efficiency of automation, and the processing power of the cloud.

“Whether it’s our heat maps or our competitor footprint on there, everyone gets it,” the analytics director says. “It’s immediately obvious what you’re trying to do. You want quick understanding, you want recall, and hopefully it drives quick action. To me, mapping does those things.”