Everyone has trouble sleeping from time to time. But if you’re in charge of monitoring global supply chain risks for one of the world’s largest automakers, there’s a lot to keep you up at night. Just ask Paul Rossi, currently a member of the strategic risk management team at General Motors, and formerly the company’s supply chain risk management (SCRM) lead.

GM produces more than 10 million vehicles a year in over 100 countries, sourcing more than 100,000 unique parts from 5,500 supplier sites worldwide. Suffice to say, GM’s worldwide production operation is a well-oiled machine. But as with any automaker, so much can go wrong.

GM’s production is exposed to a broad range of disturbances—from political uprisings and weather events to labour disruptions and supply shortages. When problems arise, the faster the SCRM team can get information to GM’s global crisis managers, the quicker the company can resolve those problems before customers are affected.

To do that, Rossi relied on a geographic information system (GIS) that maps the interconnections among GM’s thousands of tier 1, tier 2, and tier 3 suppliers. When an event such as a factory fire or a storm occurs, the system enables the team to focus on a specific part and trace it from its source to its destination plant and vehicle program.

If it looks like a part shortage could threaten production, Rossi’s colleagues in crisis management can activate their contingency plans much sooner than was possible when they manually collected data about adverse events.

“The most important thing is being able to respond and recover quickly when disruptive events occur around the globe—events like earthquakes, factory fires. By the time you know about them, you’re already in recovery mode,” Rossi says. He and his colleagues investigated 700 events (and took action on one-third of those) in 2017, the first year the system was in place.

Mapping GM’s supply base into the GIS (see image below) required a substantial upfront effort as well as ongoing maintenance, especially when it came to the tier 2 and tier 3 suppliers. “We have all the location information and data for our tier 1 supply base—the suppliers that ship directly to GM,” Rossi says. It proved much more difficult to map the sub-tiers, the suppliers that ship to GM’s tier 1 suppliers and their suppliers. 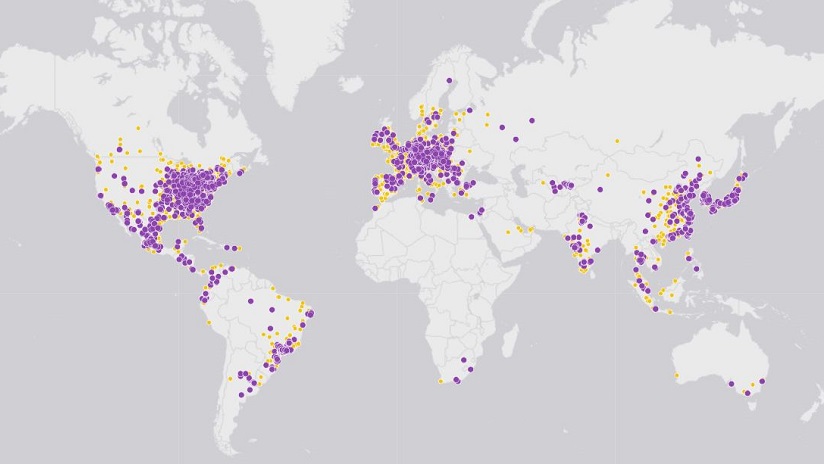 “It took a big manual effort of us reaching out individually to our tier 1 suppliers. We set a new expectation by putting a process in place to receive this information from our suppliers during the sourcing process,” he says.

Some suppliers shield the identity of their supply base, he notes, making them reluctant to provide details. In those scenarios, the SCRM team works with the suppliers directly to make sure they’re doing everything they can to manage risk, and to establish a clear expectation of what their crisis reporting to GM should look like.

GM also partners with several companies to obtain data from news sources and providers of critical weather information. “We’ve been able to integrate data feeds directly into our GIS tool,” he says. “It has allowed us to get all relevant information in one spot and run reports quickly.”

In essence, the system listens to a wide variety of information sources around the world and generates alerts when adverse events crop up. For example, if a fire breaks out at a supplier plant and a local news station covers it, Rossi and team will hear about it in near real time.

Key internal customer Bill Prince, one of GM’s supply chain crisis managers, can attest that the risk-notification system gives the automaker more response time. Last year, for example, a magnitude 7.1 earthquake in central Mexico caused hundreds of deaths and impacted many GM supplier operations in the area. Already coping with the aftermath of Hurricanes Irma and Harvey, the crisis response team was nevertheless able to move fast when it received email alerts and a detailed report about the earthquake.

Quickly convening a crisis room, the five-person team used GIS-based maps to identify suppliers within a 100-mile radius of the quake. From there, the process is straightforward. “We contact the suppliers to be sure they are healthy and safe. We try to see if they need help or resources if they are impacted,” Prince says. “Then we run our normal operation where we manage available parts, get the pipeline restored, and allocate between assembly plants.” In this case, GM regional resources—the “boots on the ground”—worked with approximately 20 affected suppliers.

“The tool gives us a lot more focus than we would have otherwise,” Prince says.

The location intelligence has dramatically increased event-detection speed and accuracy and also improved the efficiency of GM’s response, according to Rossi. As a result, the company’s insurance premiums have dropped. 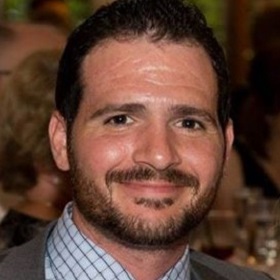 Understanding the geographic locations of our suppliers is key to understanding how a disruptive event will impact our supply chain.

Location intelligence will be particularly valuable to companies like GM as the number of adverse weather events grows worldwide. Respondents to the World Economic Forum’s Global Risks Perception Survey 2018 foresee environmental risks growing in both likelihood and impact over a 10-year horizon. That’s not surprising, given that weather events in 2017 were volatile, featuring high-impact hurricanes and extreme temperatures.

Expecting the Unexpected at GM

A wide variety of threatening events are on GM’s radar:

Natural disasters are not the only calamity on the minds of supply chain managers, of course. Data security, terrorism, and war also rate high on the worry spectrum, according to the SCM World 2017 Future of Supply Chain survey. As supply chain analyst Kevin O’Marah wrote in Forbes, managing supply chain risk used to be a matter of avoiding supplier disruptions, but now the scope is much broader.

These are anxious times, and every extra piece of insight brings businesses more power to avoid interruptions.

For GM, understanding the geographic location of its supply network is essential to understanding how a particular incident will impact its supply chain, Rossi says. “Having an understanding of what vehicles could be impacted by an event—which part numbers, and specifically which plants—really helps us create an effective response.”

Before the rollout of the location intelligence system, the crisis-response process was very similar to what it is now, but it often took days or weeks to fully understand the impact on suppliers, parts, programs, and vehicles. “We had to spend a lot of time prioritizing and pulling data,” Rossi says.

DX in the Supply Chain

Now, the location intelligence delivered by GIS “has allowed us to avoid costs associated with disruptive events. Even an hour’s worth of downtime at one of our plants can impact deliveries to our dealers and the overall customer experience,” he says.

Routine business disruptions can be just as threatening as natural disasters. GM recently had a supplier that went into bankruptcy unexpectedly. That supplier shipped multiple part numbers to multiple plants, enlarging the potential scope of problems.

“We could very easily and quickly trace the material flow from that supplier to each of the plants that they supplied,” Rossi says. “That allowed us to identify specific suppliers that could make up the production from the bankrupt supplier, and put us in a position to recover.”

GM is among the innovative companies that view location intelligence as a key tool for decision support throughout the enterprise.

“Without the tool, that could have taken weeks,” Rossi says.

With a wealth of rich data in GIS, it is a continual balancing act for Rossi and his colleagues to equip crisis managers with information but not overload them.

A recent factory fire—the most common of all the adverse events that affect GM’s production—that occurred in Michigan is a good illustration of an event that did not rise to the level of crisis. “They had a legitimate fire. It was reported on the news,” Rossi recalls. But an employee quickly put out the fire, and the line was down for only about 45 minutes. “Everyone went back in and got back to work.” In the end, this incident did not warrant raising a red flag.

Ahead of the Weather

Location intelligence helps GM prepare even for the unforeseeable. A case in point is earthquake-prone Japan, where many of GM’s tier 2 and tier 3 suppliers source their semiconductors.

Such commodities get extra attention, Paul Rossi says, because GM can’t simply plug in different semiconductors if supply of the original is cut off. That means a higher degree of contingency planning. “It’s very expensive to tool up multiple suppliers. There are cost barriers to having alternate sources,” Rossi says. “Where we know we’re counting on one or two specific locations, we do extra investigation and set up mitigation plans” in advance.

When an event is worthy of the crisis management teams’ attention, the risk management team first filters the data down to the most actionable and relevant insight. They deliver a report with an overview of the event as well as high-level statistics, such as the number of GM plants and suppliers that could be affected and the part numbers involved. “It’s important for us to provide the data and frame it in a meaningful way, not just for leadership but for our crisis management teams,” Rossi notes.

Location intelligence also helps the team understand which parts are dual sourced or even triple sourced—vital insight during a crisis. Now, “we understand when we have an alternative supply for a particular part that may be in an impact zone. The tool helps us understand that quickly.”

Rossi believes the location intelligence system drives a market edge for GM. “Part of the reason we believe this tool gives us a competitive advantage is because we’re first to respond after events occur,” he says. “So we’re in a position to provide our products to our customer in the wake of an event sooner than our competitors would be able to.”

He also strongly believes that supply chain risk management can help whole industries. The more companies that do it, the better off they all are, he says. That’s true for suppliers as well as OEMs.

Few suppliers have a supply chain risk management program that’s monitoring the globe for adverse events. “So we’re actually monitoring their supply base for them,” Rossi says, “and if something occurs with one of their suppliers, our crisis management team will reach out to make them aware.”

At GM, put simply, effective supply chain risk management boils down to the ability to accelerate the discovery of events and the actions needed to mitigate them.

Location intelligence “puts us in a position to protect our customers,” Rossi says. “Being prepared to react and respond quickly—and also having the edge to be proactive when we’re able—allows us to protect the supply to our customers, both internally and externally.”

Rossi acknowledges that being armed with data cannot remove supply chain risks altogether. The next major earthquake could happen tomorrow and disrupt GM’s supply chain, he says. “We just need to position ourselves as best we can to deal with that. GIS allows us to deal with the unknown–puts us in a position to be prepared.”

Paul Rossi and the General Motors GIS family would like to acknowledge the contributions of their colleague Tali Kritzer to the success of the GM Supply Chain Visualization application described in this article. Tali passed away this year, and will be greatly missed by the team.