How Stores Can Thrive—By Learning from Failure

In Silicon Valley startup lore, one of the more famous stories focuses on how Blockbuster had a chance to buy Netflix for $50 million in 2000—and rejected it.

The rental video chain was then near the height of its powers, while Netflix’s DVD-by-mail business was struggling in a world dominated by brick-and-mortar sales.

Article snapshot: Retail executives look for every advantage in competitive markets, and a study on the demise of one popular video chain offers clues they can use to place stores in the right locations.

When Netflix’s founders finally got a meeting with Blockbuster’s CEO and named their price, they were turned down and told the dot-com buzz was a passing fad.

Twenty years later, just a single Blockbuster store (in Bend, Oregon) remains of the network that once numbered more than 9,000, while streaming media pioneer Netflix sports a market capitalization of more than $240 billion.

It’s a cautionary tale of sudden technological change and fast-shifting consumer preferences—a reminder that in today’s unpredictable business climate, Davids and Goliaths can switch places faster than anyone might imagine. More and more, companies are turning to data analytics and tools like geospatial analysis to adapt before sweeping reversals of fortune take them by surprise.

NAR is being pitched as a project that will spark needed changes in American society. It would help the US lighten its carbon footprint and mitigate future climate-related damage, proponents say, while providing inland transportation routes as an alternative to existing coastal corridors that could be imperiled by sea level rise.

By expanding travel options throughout the region, NAR’s backers argue that families will gain more flexibility regarding where to live. For instance, a family could live on the NAR network, with two earners travelling in different directions to work, rather than being forced to choose a single metro area that may not offer ideal employment options.

This could have a profound effect on the regional economy and beyond—especially if North Atlantic Rail paves the way for other regional high-speed transit networks. For example, if NAR’s boosters are correct that businesses in the region could expand their trade areas as travel times decrease and more customers can reach them, it could change the calculus for retailers, commercial real estate brokers, and service firms planning locations and service territories.

Businesses can get a jump on these decisions by using GIS to visualize where changes are likely to occur. Combining demographic data with their CRM data, business planners can analyse how customer activity might change in areas newly served by NAR and other rail networks.

A Location-Smart Approach to Change

Large businesses in the Northeast are already struggling to understand how climate change will affect where their workforces will want to live—especially as NAR cities like Boston attempt to revitalize areas that will be impacted by climate-related issues in the coming years.

The COVID-19 pandemic and the switch to remote work have further complicated these decisions. Will tomorrow’s business leaders continue to embrace work-from-home practices or bring employees back to the office? Could NAR’s decentralization of the region provide companies and workers more flexibility—making it realistic to live farther away from the office while spending part of the workweek in the office?

Either way, as the climate crisis increases the need for large-scale solutions, projects like NAR are likely to set off changes in how people live, shop, and work. Location intelligence will help engineering and construction companies plan these major transportation projects—while helping retail and service businesses anticipate and accommodate the new customers those projects will create.

Blockbuster is one of many indelible American brands that have disappeared from strip malls and city avenues: Borders, Radio Shack, Toys R Us, and others met a similar fate. Earlier this year, the US’s last remaining video rental chain, Family Video, closed its remaining stores after a long slump.

Retail executives and analysts typically focus on growth strategies and case studies of successful expansions when looking for lessons they can apply to their own business. But a research paper published last year in The Professional Geographer on Family Video’s decline suggests that business leaders have just as much to learn from retail networks that have contracted or failed.

The study’s authors concluded that site location and related factors can have a major influence on a business’s health and the viability of any given store. Their analysis found that occasionally overlooked external factors—local population density, neighbouring businesses, store size—can have a significant, surprising effect on whether a store stays open or is forced to close.

Increasingly, forward-thinking companies are incorporating a geographic information system (GIS) into their analyses to detect such patterns in location data that the naked eye and spreadsheets can miss. The business insight leveraged from GIS, known as location intelligence, can help corporate leaders gain competitive advantage, head off risk, and capitalize on opportunities.

In the paper, Joseph Tokosh and Xuwei Chen of Northern Illinois University analysed data on Family Video closures to pinpoint underlying factors. The chain was founded in the Great Lakes region and expanded in rural and suburban areas where Blockbuster had less of a presence, reaching 700 locations across 19 states and Canada at its peak. At the time of the study, 537 stores remained open.

After studying elements like building size, population demographics, and proximity to other retailers, the authors came to three main conclusions. First, larger stores (on the order of 5,500 square feet) were more likely to fail than smaller ones. The specialized nature of the video-rental market, its simple product line, and the fact that the outlets didn’t anchor a market like a department store might, all favoured smaller stores seeing greater success.

Second, they found that the higher the density of population around the store, the more vulnerable the business was to failure. Denser populations tend to attract more shopping options, forcing a relatively small brand like Family Video to match prices and inventory with big-box stores like Walmart that also sell DVDs. Moreover, since sparsely populated rural areas often lack infrastructure for high-speed internet and the streaming media services it supports, those regions have typically performed well for brick-and-mortar video stores.

Lastly, the study concluded that the company a store keeps—its choice of cotenants and the status of neighbouring properties—was one of the biggest determinants of success. Nearby vacancies raised the likelihood of store closure. This finding dovetailed with data showing that stores in large plazas were more likely to shut down than stand-alone locations. Even a single vacancy can have an unwelcome effect, reducing the attractiveness of a shopping complex and triggering a domino-style chain of closures.

On the other hand, when Family Video locations had food or beverage outlets as cotenants, their likelihood of staying open increased. There’s an allure to pizza and movie nights that has endured well into the streaming era. When Family Video partnered with Marco’s Pizza, leasing space to the pizza chain in over 200 locations, the stores performed well: only 13 of those joint locations shuttered. Just as vacancies can pull a whole strip down, a popular restaurant can buoy the fortunes of the businesses around it. 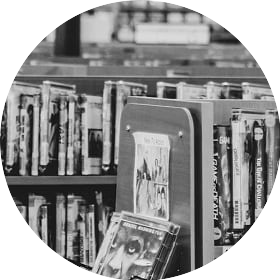 With the insights gained from location intelligence, companies can craft strategies to get ahead of consumer patterns before the only option left is closure.

By giving the kind of data analysed in this study a visual context, GIS makes it possible to detect, evaluate, and even forecast trends before they impact a business’s bottom line. For a business numbering 4 locations or 4,000, a GIS analyst can produce smart maps showing data in a geographic context and pointing the way to responsive business strategies.

A small-scale business like Family Video facing the prospect of nearby vacancies could preemptively transition the site to operate as a dark store—closed to the public, but acting as a mini fulfilment centre to fill gaps in e-commerce and omnichannel retail.

Alternately, an e-sports or video game chain might build a market strategy around the correlation between smaller populations and lower reliance on internet-based entertainment, seeking out exurban and rural areas for its locations. Those same geographies might also appear on a smart map as opportunities for an internet service provider looking to break down the digital divide.

The insight that cotenants can boost commerce for adjoining businesses could point to valuable partnerships. A GIS analyst can create a map showing sales at each store in a retail network and revealing patterns connected to neighbouring businesses.

No one knows the future, as the Blockbuster and Netflix encounter amply demonstrates. But for those with tools like GIS who understand the value of seeking out hidden patterns, there are many prescient ones hidden in the data.